Art Dept. at the Grammar School.

I was delighted yesterday to fine some images of some of the work done in the Art room, I kept the actual pieces for a while but then photographed them (poorly) and threw the originals away. I have such fondness for these images, I remember the children that made them so well and how privileged I was to work with them. Now they will be grandmothers or aunties, I hope something of what we made together enriched their lives if only a little bit. It certainly enriched mine. 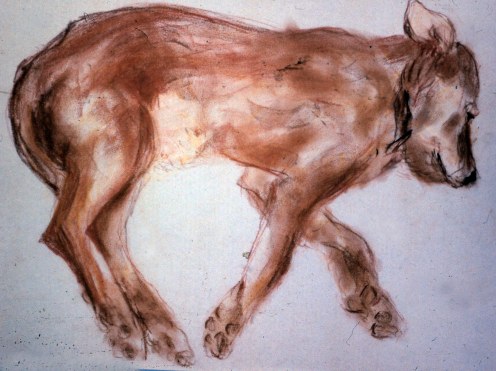 One of the objectives that I had in the way that I taught art was observation, learning how to really look, not superficially but intently. My main aim wasn’t to train the children to be professional artists, if they were destined to follow art as a career that would come out anyway, and I could help them individually. I tried to make sure that what all that the girls were working on would be a bit unusual and exciting… we had previously worked on mark making, noticing which of the media that you could draw with would be best for hardness, softness, movement, texture etc. hence bringing the dog into the classroom and trying to show the texture of his coat. (shades of the chicken at Corsham) It produced some beautiful drawings.  I started this whole blog because I was  thinking about the importance of empathy. Surely empathy above all requires imagination and yet subjects that develop the  imagination such as the arts, being cut or severely curtailed.

We used  each other as models but trying to be a bit quirky. 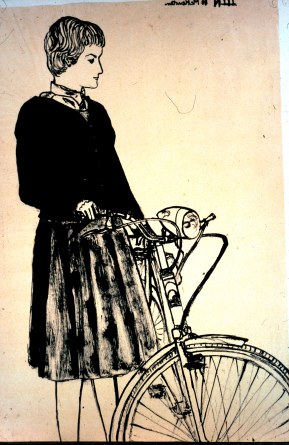 Below first year drawing. We were making a large painting for Christmas of a Nativity scene. We dressed up as shepherds, kings etc (no angels) and made preparatory drawings first.

I still used the museum collections just as I had in the village schools. Below we were experimenting with wax resist. I used the marvellous Brusho inks which came as powder, they had a good range of colours and they resisted the waxes well.

I built up my own collections too. Of course I couldn’t compete with the wonderful natural objects that they had in the Corsham design studio, but I didn’t do too badly, I had butterflies, feathers , shells, bones, little skeletons, old dolls, interesting bits of macinery etc. The usual art teachers kit.

Below. Looking at the texture and pattern of bird wings. We did work on camouflage.

I did life size clay self portraits with them which we cast in plaster. That wasn’t the end though we used them to make painting of each other with the real head and the plaster one!

When we could we went outside.

Above.  Stevenage town centre. I love the energy and freshness of this drawing, our mark making really paid off.

Below. a hedgerow beyond  the school fence, this is a very fine drawing.

Looking out of the classroom window at the snow. 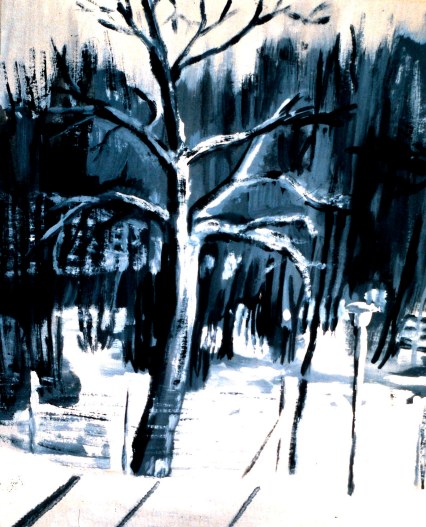 More on working in the art room in tomorrows post!

The school building was brand new but the school had already existed for three years, it had used classrooms in other schools and a handful of teachers  had been there from the beginning. We had to go in during the summer holidays to get everything ready. I seem to remember that we had a budget to buy essential non consumable materials as we were starting from scratch, My two art rooms were on the top floor at the end of a block. There was a connecting door to the next classroom which was the Geography Dept. The teacher was Mrs. Seale, a widow whose RAF husband been shot down and died in the war. We got on well, she had a delightful dry wit. She thought I was quite eccentric and never knew what I would do next but we were fond of each other. When I left we corresponded till she died.

It was chalk and cheese when it came to a comparison between St. Margarets and this grammar school. Most of these girls had come from the east end, they were street wise, gobby and loud, with a wicked sense of humour.  At the same time they were bright and lively. You had to win their trust and respect or they would run all over you but I never had much trouble because they liked the relaxed feeling of the art room

These old boots that I acquired always seemed to produce strong drawings. Needless to say we looked at Van Gogh.

I started the Corsham tradition of making creative work for a party. After half term every class participated in making decorations for Christmas, to go in the big hall. When they were finished Mr Braddy, the caretaker and I would put them up secretly after school, so that when the children came in the next morning, just before the carols and parties, they would suddenly be there. Mr Braddy and I were great pals, just as well because an unfriendly caretaker can make an art teachers life hell. He was a nice man and it used to irritate me when people called him ‘Braddy’ without the mister.

One year each class made a white glittering snowflake that when hung, turned slowly on its string. We had studied the myriad different forms of snow flakes and each person made their own page of snow flake designs. The class democratically chose one. They were made from cardboard and lathes painted white and covered with silver sequins and glitter. It looked like a miniature Regent Street. The classes took a sort of pride in recognising the one they had made. 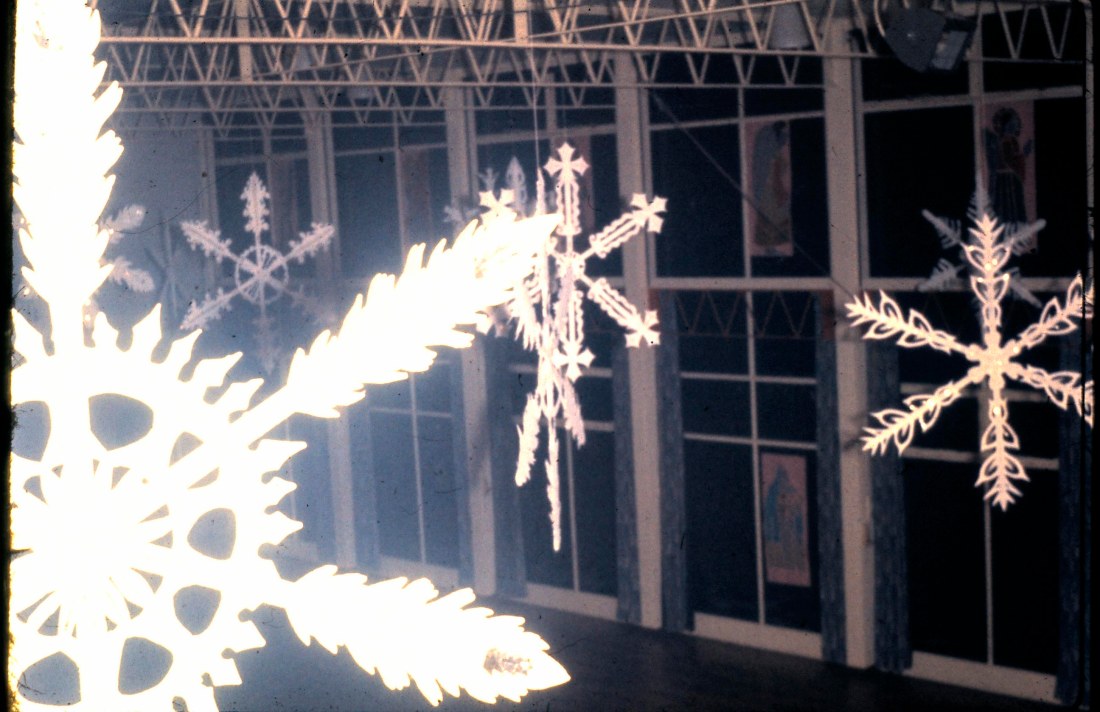 I had also got one class to make clay reliefs of the Christmas story, each child choosing a different part, which we then cast in Plaster and painted first with raw umber then with a thin uneven layer of bronze paint. They were displayed in the big show cases  situated just outside the main hall. We had looked at pictures of the great bronze doors in Florence and Novgorod. On other occasions we covered the windows with stained glass made from card and layers of tissue and glue, it looked spectacular. Once again we had looked at the glass in Chartres, Fairford, Canterbury etc.beforehand. 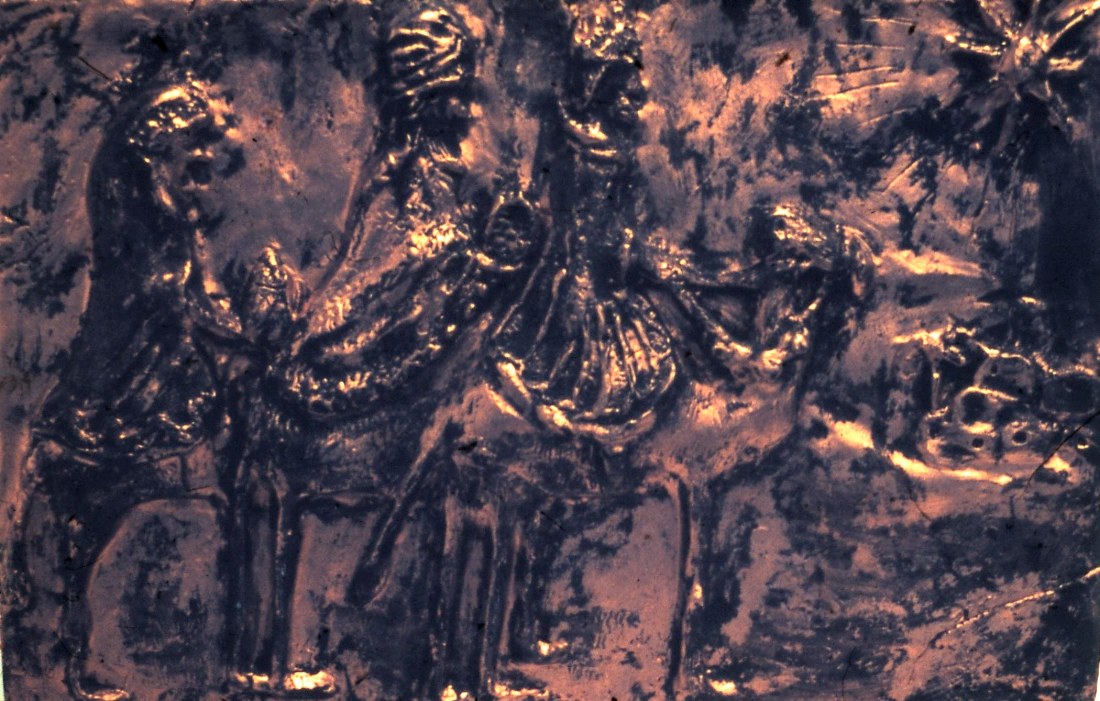 Once, I managed to get hold of four foot wide weather balloons, we covered them in newsprint, then used patterns (this is where the Marian Richardson writing patterns came in useful) to cover them. They were painted in every shade of red, we had done lots of tonal colour exercises beforehand. Finally they were given a coat of varnish. The whole hall glowed in red. One of the jobs that I was expected to do the whole time I was there, was the flower arrangement in the hall. There were always fresh flowers. On this occasion Robin and I went out with the car to nearby woods and got loads of ivy and evergreens and I garlanded the walls.

Every girl had a homework sketch book and I really enjoyed looking at them, it wasn’t a chore at all as it was always interesting to see what they would turn up with, I didn’t mark them just made a comment pointing out the good things and where they might go from there. I think the parents used to join in just as my father had done with my English essays. He used to say to me ‘What have we got to do this week?’