We set out for Leningrad.

We collected the mini bus three days before we went. We had asked them to make sure it was the most recent one in their fleet. It was illegal to drive a faulty vehicle in the Soviet Union. They gave us lessons in how to change the wheel. We also had to make sure they included a jerry can, petrol stations are few and fare between in Russia. I made two banners to attach to either side of the bus, one side in English the other in Russian. We asked the girls to come to the school the day before we set off. They were to bring their empty cases so that we could work out how to pack them into the roof rack. When we had worked it out I made a diagram of exactly where each case went and in what order. That night I stowed all the food away under the seats.

At 7am the next morning the parents brought the girls to a town car park. It was a bit intense and tearful. I was proud of the way they got down to packing the cases on the roof rack. One thing that we did not appreciate was that two national newspapers sent photographers. The Daily Mail gave us twenty rolls of film with prepaid envelopes to send film back. We didn’t do it, the last thing we wanted was to rile the Russians as we knew they were very sensitive about that sort of thing. They did publish the pics. of us in the car park in their papers the next day, under the headlines  ‘Teachers lead all female trip across Russia’ This is their photo, the girls look very serious not to say miserable, I think the enormity of the trip was beginning to dawn on them because of the presence of the press. 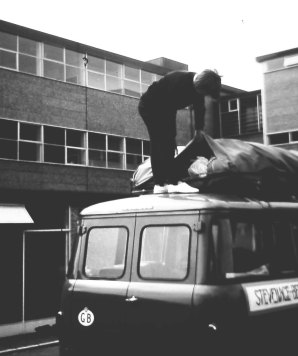 Our mini bus. Published in the Daily Mail. The two girls from the other school were with their parents

Unfortunately the photos and drawings that I did at the time got lost in my move to Kent. All I have are some slides which I have copied digitally.  Colour film fades and gets dirty so with most of them I have changed them from colour to black and white but they are of rather poor quality.

We drove to Harwich. There was no roll on roll off in those days. I can remember it being quite tricky driving the bus to exactly the right place on the tracks at the bottom of the chains and praying that the luggage was well strapped down.

From this point on it is my diary written at that time, if I remember extra things as I go along I will include them.

Hook of Holland….on the most desolate expanse of wasteland next to the docks. There in the middle was a fantastically streamlined luxury coach with a red carpet leading from it’s door across the very rough weedy ground. Some very sheepish looking and overtly rich Americans were led onto this carpet and propelled along it. At the door they were each offered a carnation by a girl in full Dutch costume. When all had got on along came another costumed Dutch girl on a bicycle who ceremoniously rolled the carpet up and cycled back through the wasteland. The name on the side of the coach was ‘Priceless Tours USA’ It just looked like a surrealist dream somehow, it was  the incongruity of it all.

Our journey began through the neat and highly cultivated Dutch landscape and soon into Germany. The autobahn certainly helps you to speed along but there was one worrying incident. An open backed lorry with British young soldiers came up behind us and realising that it was full of young girls, they kept speeding past waving and shouting at the girls then deliberately slowing down just in front of us, then we would have to pass and they would repeat their manouevre, this is not much fun on a motorway where traffic is moving at speed and eventually we had to make a stop in a lay by to lose them.

Our first stop on the autobahn

Our first night was in Hanover. We were staying at the Youth Hostel. It looked rather ordinary from the outside but in comparison with British hostels at the time it was palatial. It was like staying in a hotel with meals to match. We were all tired it had been an emotional sort of day.

The town of Stevenage is twinned with Wolfsburg (the new town built round the Volkswagen factory. Our town council had given us a letter of introduction and greetings. We stopped at Wolfsburg, on our way the next day, they knew we were coming and made a huge fuss of us. They had arranged cars to take us around the town to show us the sights and then we had a slap up banquet in the town hall. Wolfsburg is indeed very like Stevenage but with far better facilities and amenities for their workers. Altogether we got the feeling that Germany is far more prosperous than we are. Everything seems to be of better quality.

Our stop at Hanover