Working with children….heading for the final disaster

I loved it when the children worked in the studio. It was a happy relaxed atmosphere. 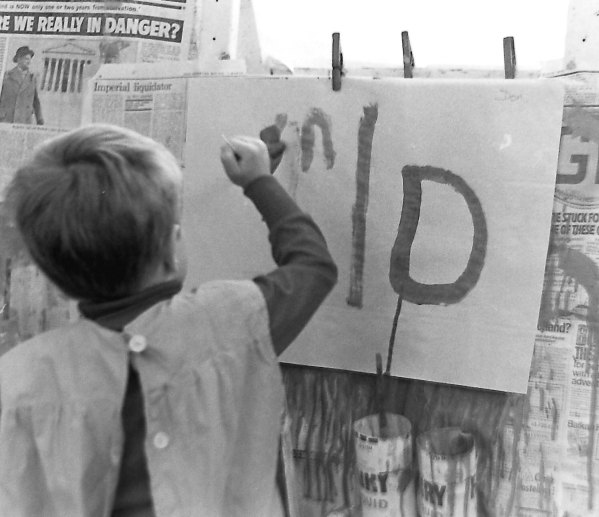 You could often hear the children telling a story as they painted ‘and here is a tree’ a beautiful tree would appear ‘and a bird’ at this point I am thinking, that’s wonderful, I’ll mount that and put it on the wall…but then ‘ the big wind came and blew them all away’ and big black brush strokes would cover the whole lot! The point is that it had served a purpose for the child: they are not thinking I’ll make a piece of art, they are telling a story.

In 1976 as the college grew, some lecturers were hired to work part time. and there was a shortage of rooms, I volunteered to share mine and soon met Mim Hughes. We got on well and soon reached a way of sharing, though I’m sure at times  she must have wished that it wasn’t an arty person she was sharing with. I did have rather a lot of unusual things decorating my room, like kites, masks, puppets, kilim rugs etc. A more minimalist type would probably have been better. Then one day several months in, she didn’t appear and I never saw her again in Hockerill. Her young teenage son ( 13 ) had been killed by a car going out of control whilst he was cycling home. She was so overcome by grief that she couldn’t return to work.

In 1977 Betty and I saw an advert for bed and breakfast at a field centre in Orkney. I liked islands, we had already been to the Hebrides, and we decided to go. When we got there it was quite a way outside the village of Birsay. We went up to the front door and knocked and who should open it but Mim. It was such a coincidence and surprise almost as though it had been meant. I was glad because I had had no chance to talk to her about her dreadful loss. Her husband was a writer and they had decided that running the field centre would fit well with his writing. In subsequent years he went to Rolle College, Exeter as a lecturer in Creative Writing then finally they emigrated to New Zealand. I think they kept moving on to try to leave the grief behind them.

Orkney was majestic, hardly any trees and not benign like Tresco and with an almost permanent wind blowing. It was full of sea life, wonderful bird cliffs and seals that cried at night, no wonder that people believed in mermaids the sound was haunting.

But that wasn’t the end of the coincidences (or serendipity). Close by was the Brough of Birsay, an island that could only be reached by a causeway at certain tides, and certain times of the year.

Causeway to the Brough of Birsay.

We had heard they were excavating there. I had read the Orkneyinga Saga before going up there, an early poem about the Vikings. The tide was right and we made our way across.   The digging was going on and someone said you ought to meet the director, lo and behold it was another of my Hockerill colleagues, could you believe it! He had been a history lecturer but left for a post at Durham University and here he was running this dig. He didn’t know about Mim just up the road. Because of him we had a real insiders tour of the site and it’s history, including their latest finds. Through Mim I also met the island textile makers and spinners.

Excavations on the Brough of Birsay.

Throughout the seventies there had been drastic cuts in the colleges of education. Some of them were small and quite parochial, they went first. It was a time of struggle to prove that you were worthy of remaining. We had to spend so much time in meetings and in writing papers, I hated all that side of it. One by one the colleges surrounding us were closed. 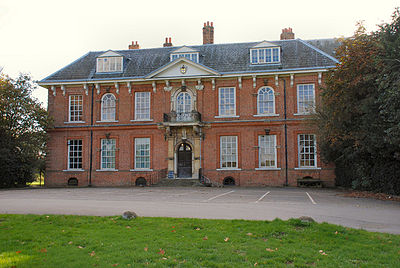 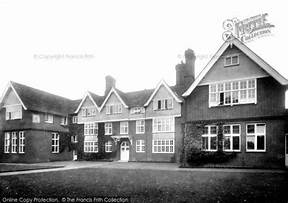 For a long time nothing happened and we thought we were safe. Then a brand new student union building was built- state of the art, costing thousands-… and we knew we were safe…BUT WE WEREN’T. Hockerill college was going to be closed. It was a dreadful, dreadful time. Everybody had to consider what they were going to do. There was some redundancy money but hardly enough to live on for the rest of your life. The other heart breaking thing was that you had to leave the remaining students in the lurch. I felt like a rat leaving a sinking ship.As it happened they appointed one of my old students, who had got a first, to run the textiles dept for the remainder of the time, as part time lecturer.

I had heard that the old woman that did the spinning on Orkney had died and they needed a spinner and craftswoman. I seriously contemplated it and made saleable textiles to test the waters, but I soon realised I couldn’t live on that alone. The main thing that prevented me from going to Orkney though, was the almost permanent wind that blows there.. I hate the wind, it makes me feel edgy. The next best thing Cornwall, I saw that a school in Penzance needed a head of an art dept. I was tempted but the part of my family that live in Cornwall warned me that it would go to a Cornish person as jobs are so difficult to find down there. Then hey presto a rare textile lecturers post was advertised at Christchurch College, Canterbury. Well I never thought I would get it as there were so many people floating around, having been made redundant from other colleges. There were six of us again and to my surprise I got it. I think it was because I had rather unusual and more art based textiles to show in the hangings that I had done than the others…so a new chapter began.

I felt very sorry for most of my colleagues who never got work again, such a waste of talent.