In January 1978 there was a great storm, it started in the evening and went on through the night, it was quite frightening, even the water in the loo was moving. The windows were rattling. Most of the glass in the windows is original and quite fragile, I was afraid it would break under the strain.

It had more or less died out in the morning. We had a shock when we looked out of the front window…the pier structure had fractured and fallen. It was like a great beast that had collapsed. I seem to remember that the sun was shining. There was too much damage to drive to work so I went out to record it with my camera. I had already taken a lot of images of the pier already, so this was a sad follow up. All through the cold winter the men were out there at low tide with bulldozers and great machines with buckets attached pulling the structure down and bringing the pieces to the beach opposite the amusement arcades. I felt sorry for the demolition men it was often very cold and wet. What a horrible sad job. Interestingly when I took the shots I could see that all the iron cross bars were already numbered. 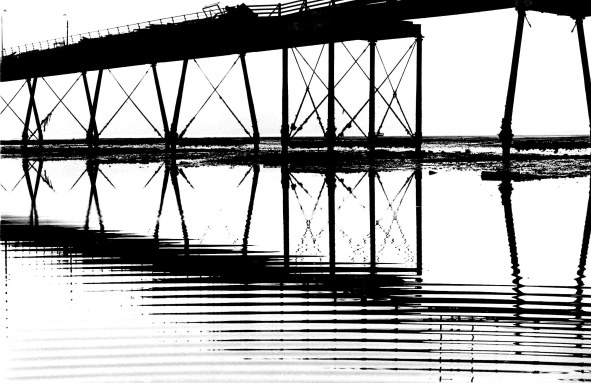 I had taken these photos before the storm.

The promenade was badly damaged. and the road by the Ship Inn and outside the amusement arcades were covered in shingle. My house is on a very slight slope which saved us from flooding, houses further down the road were not so lucky. 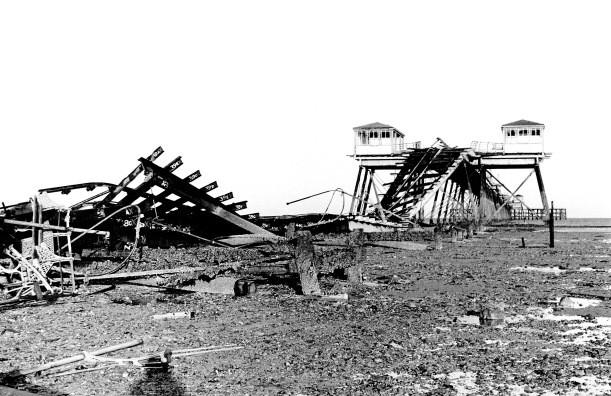 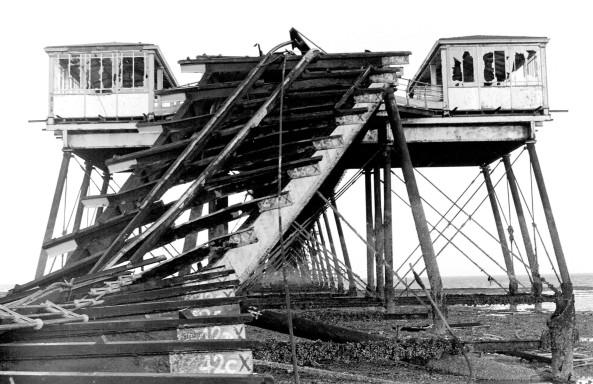 It was like a great beast with a broken spine. You can see the numbers on the struts. 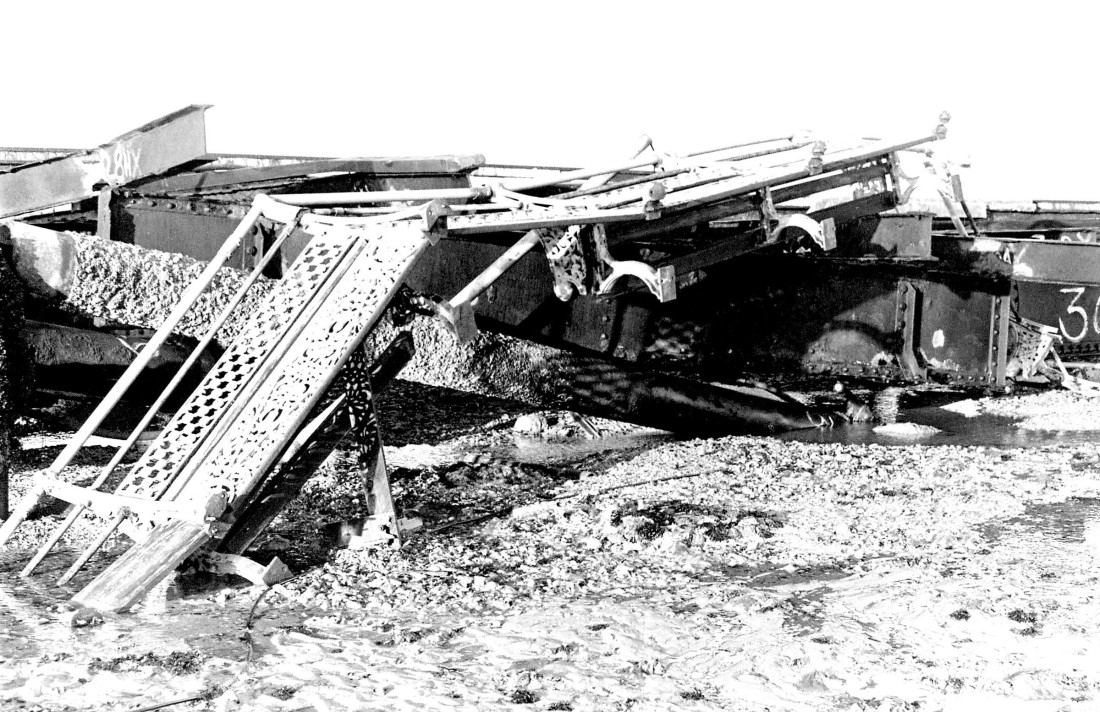 They brought the remains to the beach, I wish now that I had found a piece to keep.

I  made several pieces stemming from that experience. The first one a photo silkscreen, I used it to print a length of fabric.

For the next piece I decided to use a deck chair.The deck chair is such a familiar icon of the sea side (or it was). When I first came you could hire a deckchair on the promenade opposite the house. I decided to mismatch images…the benign deck chair with it’s implications of summer sunshine and the pier -normally a friendly place- but now whipped by the winter gales. The structure of the chair was multi purpose it could be either displayed as a straight 3D work or used as a frame and hung on a wall. I printed some of my photos of before and after.

The experience of using the chair was good so I decided to use the idea again but in a different way. I had already devised a way of making believable pebbles with old tights and stuffing so I made another mismatch. You don’t expect to sit on hard pebbles. They were so convincing that people asked how I managed to stick the pebbles on and if it was heavy! I have always liked the idea of bringing two disparate things together to see what happens. I did several more pieces developing the same themes. They were bought and I was so surprised when I sold them that I never recorded who had bought them. I haven’t learnt over time either.

I had been to the museum of course, one of the first thing I did when I arrived, and I knew that a mammoths tooth and other fossils had been discovered under the mud under the pier. When I was out there at very low tide I used to think about it. Ken and I both liked fishing,another thing we had in common (my father had taught me, he was a keen fisherman). We were often out there digging for bait and I thought so often about how the area had changed in time and the creatures that had roamed there. So that lead to my lino print called ‘Time beneath my Feet’. I have a roller press but I prefer to to use a hand baren.

I also made a series of monoprints of the surface of the beach.