Confession…I am a museum and gallery junky. There I’ve said it!

I blame my father, he took me to the Ashmolean Museum in Oxford when I was quite young. Of course it was the Egyptian mummies that fascinated me, I think that’s true for a lot of children. That was it, I was hooked. Wherever I go I look for a museum or gallery…I know that I will find some kind of treasure there. I have never been disappointed. One museum eluded me and I have never forgiven it, it was a museum for tin sculptures and constructions in Lisbon in 1960. I was really looking forward to it as I had seen pictures, it was closed for one week and it happened to be the week we were there.

Sometimes you come across quirky little ones like the folkloric museum in Zennor. I have often got to know them before they have been ‘polished up’ into interpretation centres. I used to like the railway museum in York when it was in a big shed next to the station. There were hardly any notices, everything was piled in, you had to discover your own visually interesting treasures. The same thing applied to the old Pitt Rivers Museum (as I have mentioned earlier in the blog) All sorts of things were just kept in drawers and you could just root around freely. 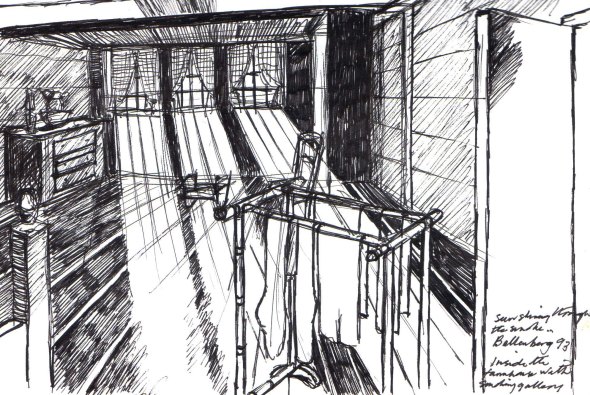 Inside the spinning room in the transplanted weavers house. Swiss Open Air Museum.

This museum is like our Weald Open Air Museum or St Fagans near Cardiff. Historic buildings of all kinds have been saved and rebuilt in parkland. I am very fond of this drawing because of it’s visual complexity regardless of the subject. 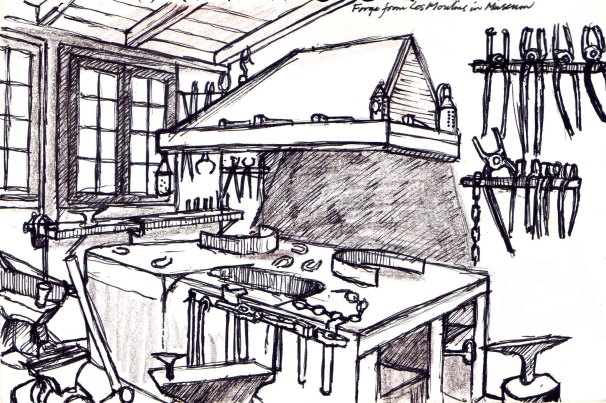 This one also from Switzerland but this time the rooms a re-erected inside the building. I loved the shapes of all the blacksmiths tools and the way they are arranged. It gave me the idea for a new piece of work. 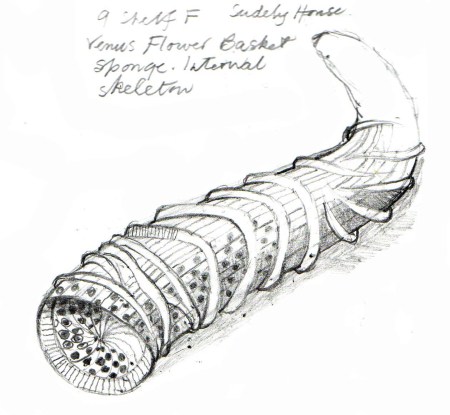 This was an unexpected find, what a delicate object, I found it in Sudely House, not a place where you would expect to see such a thing. It is the internal skeleton of a sponge called a Venus Flower. 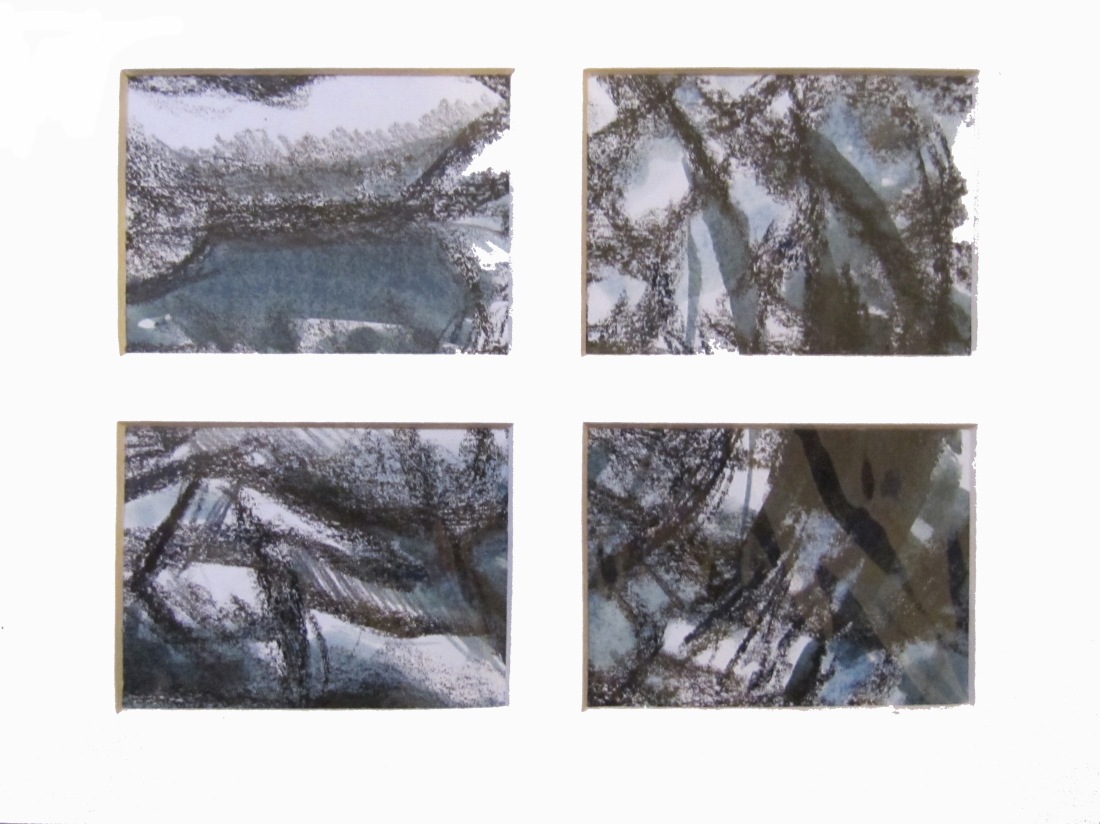 In contrast this hard rock from the Geological Museum. I decided to split it up into four, each one of the would make an interesting piece in it’s own right. 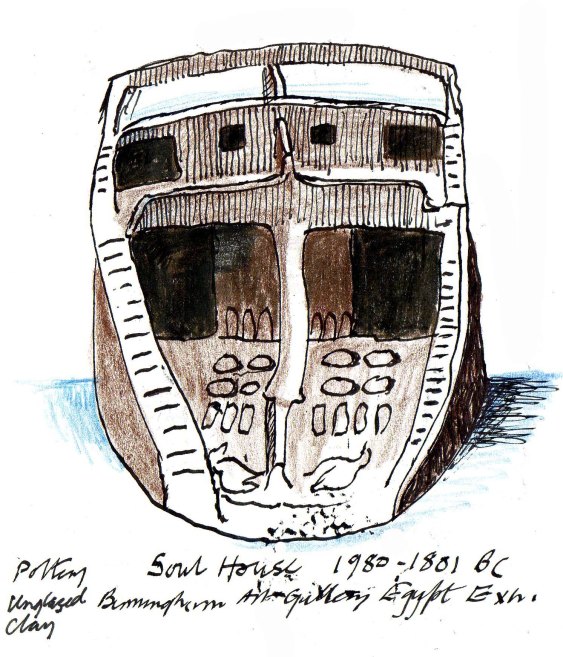 A clay Soul House. I love the idea of a soul house, the soul can go in there to rest until it is resurrected in it’s next form. I liked the Birmingham Gallery and Museum. They were doing really imaginative work with different ethnic groups in the city. The next week  they were going to take the children from one of their art groups to London, to the  galleries and museums but the mothers asked if they could have another bus and come too. That doesn’t sound like much until you realise that these women hardly come out of their houses. To me that is one of the things that is good about cultural activities, it can bring people together in a non threatening way. 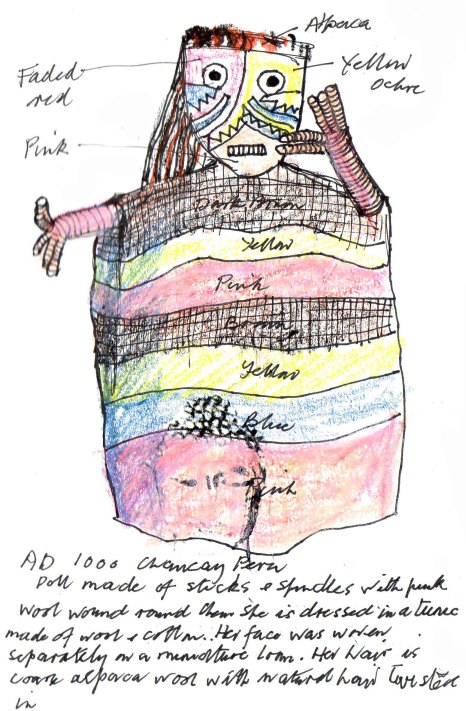 Someone has lovingly made this little doll, what we don’t know is whether it was made for a child or for ritual purposes. I hope it was for a child. It resonates with me because my father made me a comforter doll out of an old blanket. Essentially it was five rectangles, body, two legs, two arms. The head was made from an old beret. The eyes were black trouser buttons and he had embroidered a mouth and a nose with darning wool. It was rather flat than three dimensional, very primitive, but I didn’t mind. I called it Tweedle and it remained my comfort for years. It was wartime so a lot of toys were home made, how different it is now. 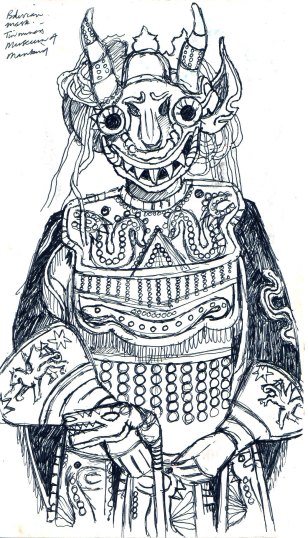 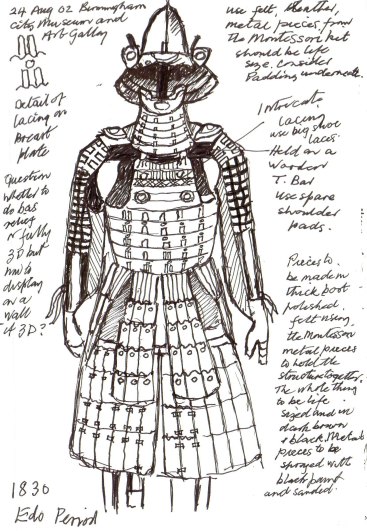 Two items of dress with such different purposes on the left the dance costume worn for a festival by Bolivian miners and Japanese armour from the Edo period. I have used both of them in subsequent pieces of work. I picked up the idea of separate units fixed together from the armour. An upholsterer friend gave me a big sack of leather off cuts left over from his work. I had no idea what I would use them for but never look a gift horse in the mouth (this is why my house is untidy, I keep things that might be useful one day!) I cut the pieces into rectangles and joined them with brass aeroplane clips gradually building up the shape. I have it hanging in my hall, it’s OK but I envisage more work on it adding punched holes and lacing. The armour has very elaborate lacing. 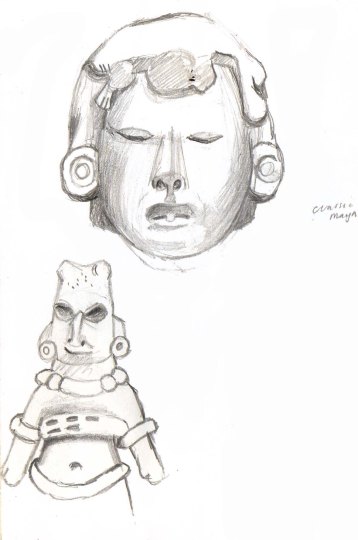 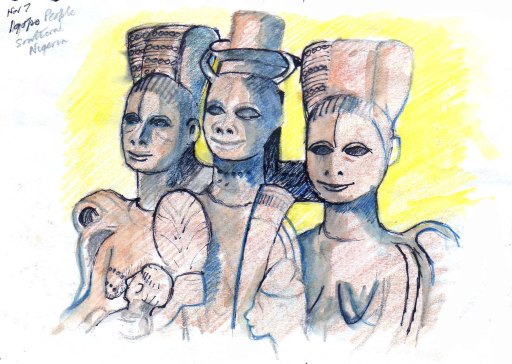 Different heads, at the top Mayan, now there’s an interesting culture, and Nigerian. The art of West Africa is so rich. 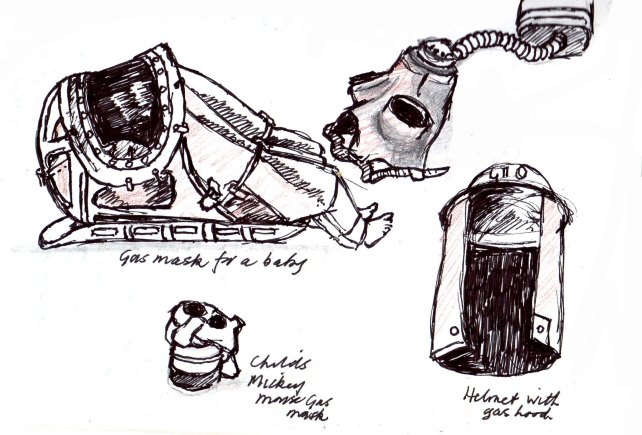 I found this babies gas mask in the museum and art gallery in Swindon. I was six when the war broke out and I had the Mickey Mouse mask. It was in a square cardboard box with a cord to hand over your shoulder. A surprise I didn’t even know that there was such a good little gallery in Swindon, it had an excellent collection of distinguished paintings. I enjoyed it. 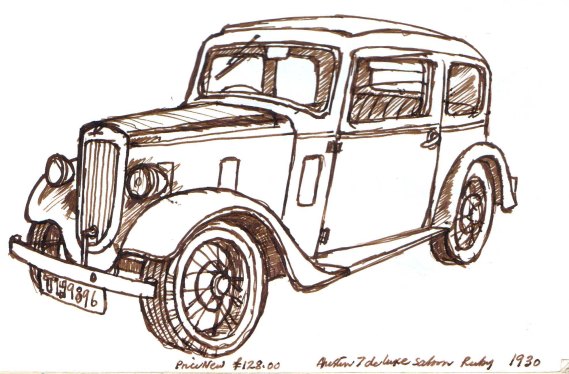 Car (Austin 7 but not that far off from my old Ford Popular) from a village museum in Wales and below an elegant sculptural piece of railway equipment from the old railway museum in York. 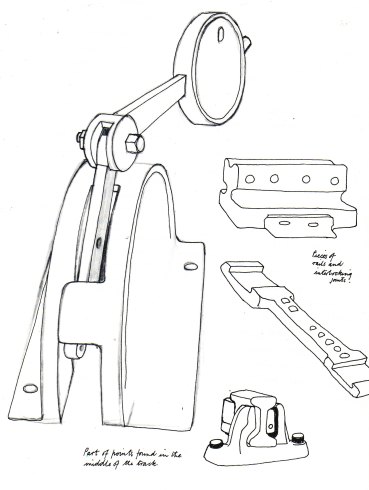 Of course you realise than I could go on for pages and pages just with my hauls from museums, but I will just include two more because they have similarities. I might spice up further posts with the odd museum drawing here and there! 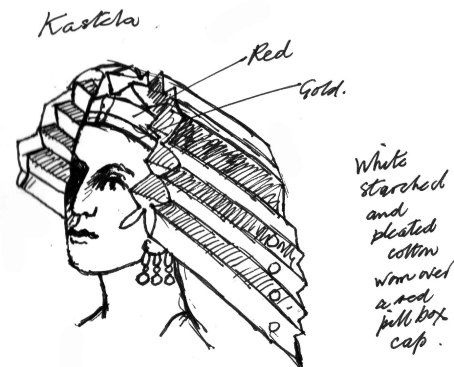 Hat with intricate pleating of the starched cotton. Imagine ironing that!

But this beautiful sculptured organza jacket by Kei Ito, in the Birmingham Art Gallery, was a real work of art, so amazingly clever in it’s construction. I don’t know when a piece of clothing stops being just functional and turns into a work of art…but I’d say this was pretty close.

As you will see from above I also note down the names of the painters and paintings that I have liked. When I look at my drawings again I realise how many wonderful places I have been too and what a creature is man! (and woman!)