I haven’t said anything about Betty (see earlier posts) since I wrote the piece when I married for the second time, this happened shortly after Betty and I came to live in Herne Bay. She was very upset when I married Ken. I had been her companion and substitute daughter for so long that it was a shock to her. She had been away in Austria working withe refugees from Hungary and running their hostel when I first met Ken. Naively I had thought we could all live together like a family (after all I had already experienced it with my first husband’s family), but of course we couldn’t, there was too much tension. I could have gone to live in Ken’s bungalow in Blean, but Betty could never have managed financially, she had no money to speak of. The solution was for Betty to have the nicest rooms at the top of the house and for Ken and I to have the ground floor and the condemned basement.

Ken and Betty shared a love of music.

It was condemned because the sea came in in the great floods of 1952. The plaster wouldn’t stay on the walls as the bricks had salt in them. we had it ‘tanked’ twice by professional builders. It always worked for a while but then the plaster started to come off again. In the end we hacked off the plaster and mortar down to the bare bricks, sealed them with dilute PVA and then tiled them. The parts that we managed are OK but we didn’t complete the whole area, the plaster still comes off the rest of the walls but I’ve just had to learn to live with it. Now there is central heating down there with just a kitchen the other room is my art store and since I use all manner of materials it is very full.

I had my gall stones catastrophe (see previous post) after Ken had died (thank goodness it would have been really difficult for him to cope with) All my friends and family visited me regularly but Betty was my rock, she was there just about every day during the worst part. She stayed with friends in Canterbury.

When I had just about come back to the land of the living again, some friends asked me what I would most like them to bring and I begged for a sketch book and drawing pen. I was so delighted when they brought it. I tried to draw but there was no connection somehow between my brain and my hand. I felt quite distressed but I kept trying and my capacity gradually came back. Somewhere I have the strange little drawings I did at that time but I can’t find them..

As I have written elsewhere Betty was an extraordinary person full of energy and good will but also with a great skill at organisation. She was a talented linguist, with friends all over the world. When we lived in Stevenage she was learning Chinese going up to the School of African and Oriental Studies once a week. She went to China for three weeks.

When she came down to Herne Bay it was just too far to London on the train to continue her study…so what did she do ? She started to learn Arabic with an Arabic speaker. She just loved languages.

She was instrumental in starting both the WEA in Herne Bay and the Three Towns twinning association between Canterbury and district, Vladimir in Russia and Bloomington USA. Both these organisations still exist and both have honoured her.

In her mid eighties she became seriously ill and had several spells in hospital losing consciousness and hallucinating ( I knew where she was coming from on that one!) 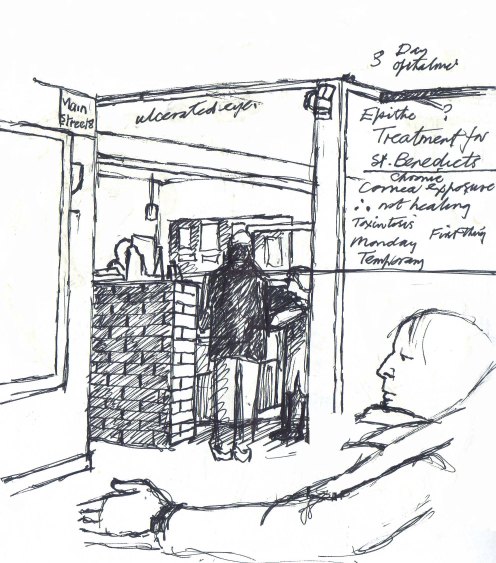 Betty waiting for an eye test.

Eventually they couldn’t do any more for her. I converted the downstairs front room, my living room, into a bedroom for her and nursed her for about a year, it was hard demanding work, unrelenting because I couldn’t leave the house. She had nurses to deal with her medical needs but during those times I had to go out and buy our food supplies. I set up a baby alarm between her room and my bedroom and frequently had to get up in the middle of the night. She kept falling out of bed or off her chair and I had to get the ambulance men to lift her back. I felt apologetic but they assured me that they are quite used to it. You can get very tired and ratty, and then you feel awful that you haven’t been patient. One night she didn’t ring the alarm but when I went in in the morning I found her sprawled on the floor half naked and cold. Her clothes had come off as she fell. 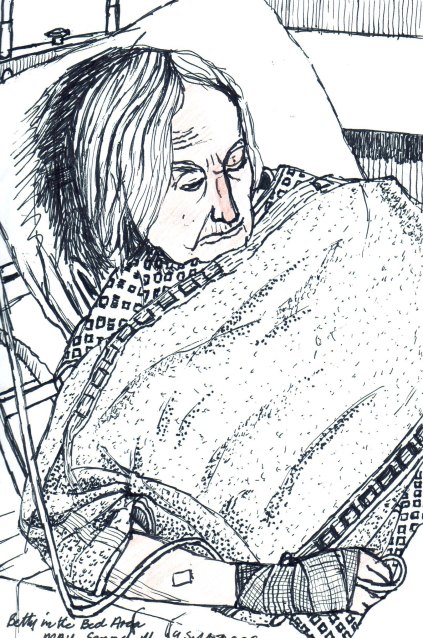 When the nurse came that day she told me that I couldn’t go on like this, Betty needed to be in a nursing home. I’d known this in my heart for a while but how can you find out about which homes are suitable and also Betty didn’t want to go. I asked the doctor for advice and he said they are not allowed to give it. There you are… looking after a person full time so how can you investigate the different qualities of the homes. I had been in lots of them with the band and I knew how they varied in quality. Betty was an intelligent feisty woman, she was physically ill but still had an alert mind, I didn’t want her to go somewhere where she would be treated like a child. Then the dear nurse said to me ‘I’m not supposed to say this but I  know just the place for her, I’ll arrange it’ I was overwhelmed with relief and gratitude. I knew Betty would resist but fortunately in a way I was due to go into hospital for the replacement of my hip and we told her that she would be there whilst I was in hospital.

The nursing home was St. Benedicts on the sea front just beyond St. Georges Terrace. She had a room of her own at the back and I tried to make it homely with her own things around her. I had my op. then she kept saying ‘When am I coming home?’ I felt such a traitor as I knew she was never coming home. She had more spells in hospital and I always went with her. I visited her every day for nearly two years, she also had visitors from all over the world including ten of the choir from Vladimir. She soon got a room at the front so that she could look over the sea which pleased her. I read to her most afternoons. One afternoon she said ‘Could you read me some Harry Potter?’ I was amazed that she had heard about him, she had heard a programme on her radio! 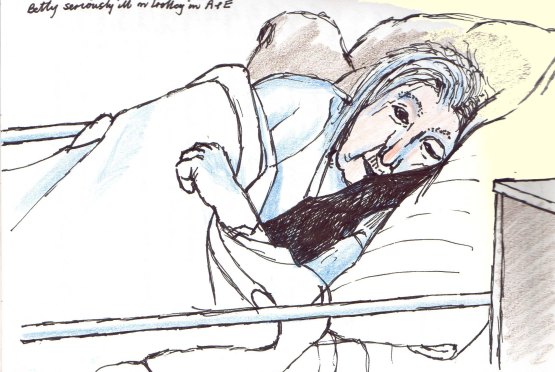 Eventually my dear friends invited me to go and stay with them for a few days in Malvern for a respite period. On the second day we received a phone call to say that Betty had died.

When she was in hospital I did make some drawings, I feel a bit unsure about it but I’m going to include some as they were done with love and respect for a remarkable person.